How hard is it to learn German? A detailed analysis

Is learning German as hard as most claim? This post explores the most common reasons why learners struggle with German and what to do about it. 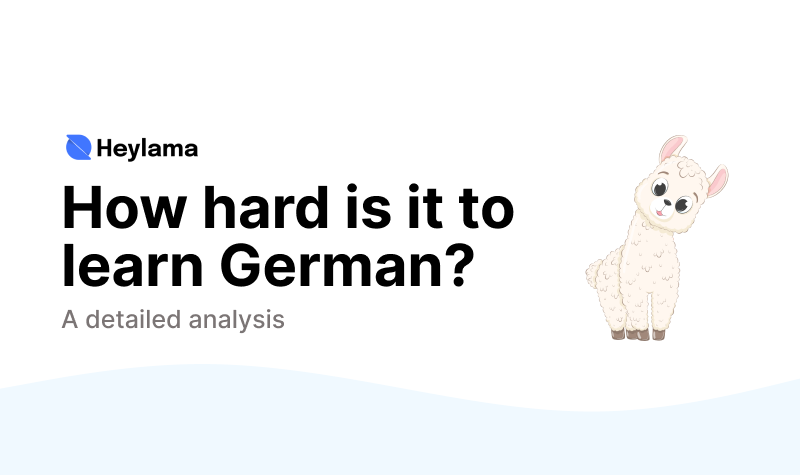 Is learning German as hard as its reputation suggests? According to the Foreign Office of Germany, over 15 million people are learning German globally. That places it right into one of the world's five most popular foreign languages!

Are all these learners predestined to fail and realize that years of learning were spent in vain, or is the difficulty of learning German a myth? The truth is somewhere in the middle. In this post, we’ll explore why some learners are convinced that German is hard to learn and what you can do about it.

No, German isn’t the most difficult language in the world.

First of all, let’s get one thing out of the way - if you search for “the most difficult languages to learn” in the world on google and read the first few posts on the list, you’ll quickly notice that German isn’t on any of them! Linguistically speaking, German doesn’t belong to extremely hard languages. For example, Leverageedu lists these ten languages as the hardest:

Other sources are more or less consistent. German is nowhere to be seen among these phonetically and grammatically complex languages.

Good news - learning German is supposed to be easier if you speak English.

German used to belong to category one or “Languages more similar to English.” But as I researched for this article, I noticed that German had changed its category to #2 which has no name or label but is 1 level before “hard languages”. Their data shows that it takes approximately 900 class hours to reach working proficiency in German. Please note that class hours also imply that you have your self-study hours which bumps the total hours invested by a notch. Anyway, 900 class hours sound a lot, but if you’re already past A1 or A2, you should be able to get them under your belt within a few years.

But why does learning German “feel hard”?

Many of us knowingly or unknowingly compare German to English. Most German learners already speak English as their native or second/foreign language. We use English as a benchmark for assessing the complexity of German as a language.

Although they belong to the same family of Germanic languages, German has a few “grammatical upgrades” that make it less straightforward. For example, the interplay between genders, articles, cases, tenses, etc. makes it more difficult than English grammar.

One consistent observation is that learning to speak German confidently takes longer than learning English. English language learners nostalgically remember how easy it was to pick the basic tenses and vocabulary of the English language and get cracking.

Why did learning English feel easier?

That said, most English as a foreign language speakers now learning German tend to forget that when learning English, most of us approach it with much more energy and motivation. Learning English represented much more than just acquiring a new linguistic skill for many. It was about accessing new knowledge, countries, cultures, and opportunities. It’s as if your success in life depended on mastering English.

The truth about language learning is that it requires consistent practice and effort over a long period (900 class hours, remember?). Yet, once we start learning German, not everyone approaches it with the same enthusiasm. Many do it because they need to, not because they want to. We spend less time practicing it. We spend less time exploring it. We clock in way fewer speaking practice hours.

Nowadays, you can hear English everywhere. Every city in the world has expats who speak English. Netflixes and YouTubes of the world have made it easy to access the original content. That’s not always the case for German, although that has recently improved. The Irony is that practicing German is challenging even in Germany. As an expat in Berlin, I can confirm that getting to practice my German here is a real challenge (that’s why I practice my speaking with an online tutor).

And now, add more complicated grammar rules on top of the two factors above, and we have the answer to why German feels harder than English. The good news is that most of those fears and feelings are not 100% accurate. Let’s break it down further. We talked to over 20 German learners and identified the four biggest myths about learning German.

Myth #1. German vocabulary is complicated and impossible to memorize

This is a myth. If you jump into learning complex and irrelevant vocabulary, German words can quickly get intimidating. But that's the case with any language or, for the sake of discussion, even profession. Imagine learning and using advance legal or accounting or aviation terms without having any basis first. German can have compound vocabulary words that are hard to learn for beginners, but most words and phrases we need for everyday life are within reach. And over time, as we gain confidence, even compound words become easy to master.

If you follow a few basic rules, you should be able to grow your German vocabulary base over time. The most effective way to learn vocabulary is through spaced repetition, a method that spreads out review intervals as your memory of the vocabulary gets stronger. Heylama is one such free flashcard tool - it's a digital flaschard app designed specifically for language learning. It also has a Telegram bot companion that makes praciticing vocabulary effortless if you use Telegram. To discover more flashcard apps, read this guide we published on the topic.

Myth #2. There is no way I can ever speak German fluently

Another huge myth slowing your progress is a deep-seated fear that your speaking skills will never be good enough to speak with native speakers. This is far from the truth.

Your speaking isn’t improving mainly because you’re not speaking enough. That’s it. Speaking is a skill just like vocabulary and requires hundreds of hours of practice.

Speaking confidence requires you to speak German, make mistakes, and produce the sounds of the language. Compared to English, finding a native or simply good German speaker is harder but not impossible. You can check out tandem apps or simply get an online tutor. For 10-15 Euros per lesson, you can have 30-60 minutes of unobstructed speaking practice. This is cheaper than offline courses, and the benefits are greater. Our data shows that you speak German 80% more during one-on-one online tutoring than in a group session. Over time, this adds up and leads to massive progress.

No sugar coating for this one - German grammar can be confusing. Depending on the language you speak, you might find it more or less complex, though. For example, people who can speak Russian or Hungarian find it easier to wrap their heads around German cases such as Dativ or Genitiv because they have such cases in their own languages. English speakers have less difficulty with the concept of articles, but some languages don’t have articles at all.

But here is the good news - our brains are pattern recognition machines that can crack any, even the most arcane grammar structures and rules. All you have to do is feed data into your brain - the more you read or hear, the more you internalize.

German grammar might take a bit of time, but some people speak so well that even natives get surprised.

One of our favorite German channels is DeutschLera by a German teacher who learned German as an adult! But her German is so impressively good as it could get (and should give all of us, German learners, hope that this is doable!):

Myth #4. I’m too old to learn German. My brain is just not as sharp.

You can learn German (or anything!) no matter your age or context. It's true that aging is correlated with a decline in cognitive abilities, but recent studies also show that our ability to learn stays sharp if we keep exercising our brain and learning new things. Most often, the truth is that it’s not our capability to learn that’s deteriorating but the amount of attention and time you can dedicate to learning that’s dwindling. As busy adults, we have only so many hours in a day. Combining work, family responsibilities, or studies, as well as social life, can be demanding. We have so many books to read, movies to watch, and things to learn.

So you’re not too old to learn German. You just need to make more (mental) room for it. If you consistently find time and energy to spend on German (for example, by signing up for a challenging language test you must prepare for or committing to at least 1 hour of German tutoring every week), you can make significant progress in German at any age.

You’ll make substantial progress if you follow a few basic principles. Learn consistently. Don’t just do what’s easy - practice speaking even if that’s just by yourself. Use a spaced repetition app to build up your vocabulary base. Read in German and listen to German speech (YouTube, Podcasts, movies) to learn how native speakers apply the grammar rules to automate it. Most importantly, embrace the growth mindset and maintain a positive attitude.

You can do it - it just takes a bit of time.