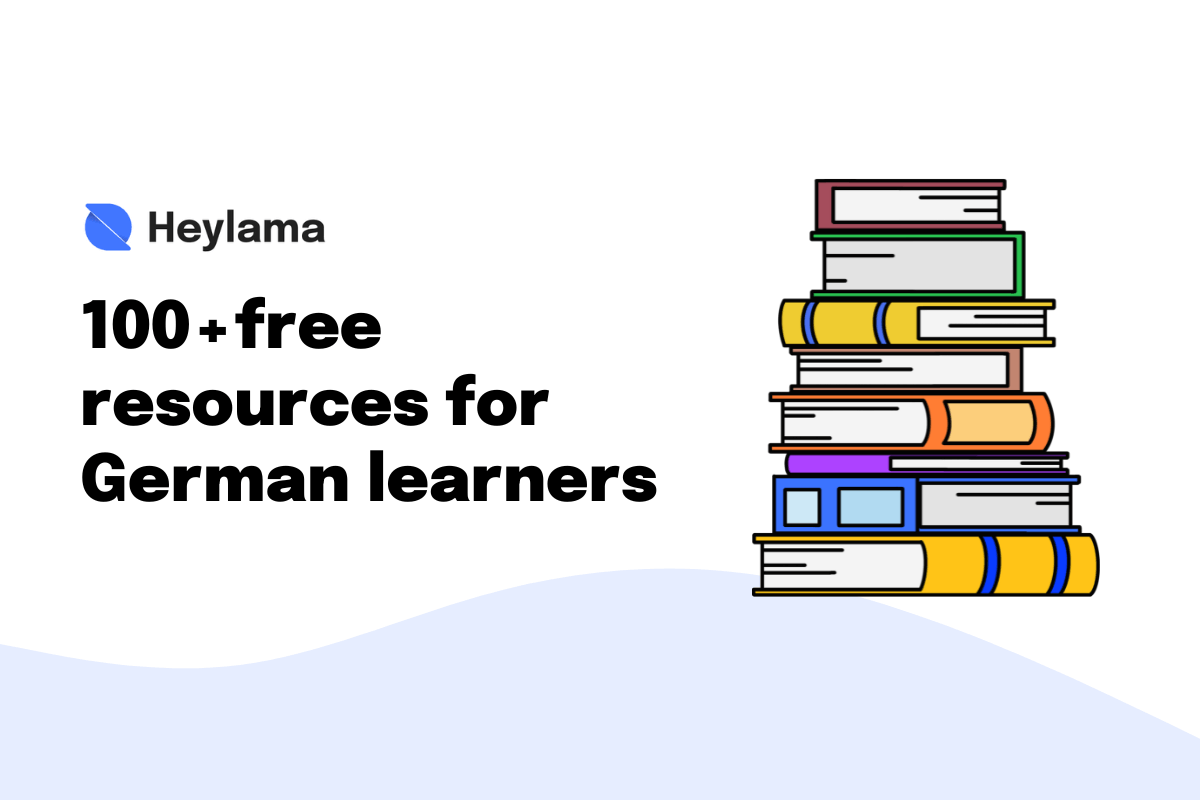 The most comprehensive list of practical, free, and exciting German language resources for German learners. We update this list regularly. Feel free to get in touch if you have suggestions - we're always eager to improve this list.

EasyGerman
About: We produce a show that helps you learn the German language and get to know Germany. We publish two new videos each week, one on Wednesday for beginner levels (A2 - B1) and one on Sunday for more advanced levels (B1 - C1).
Subscribers: more than 450 000 subscribers

Learn German with Anja
About: A teacher from Germany who teaches German language in an un-German way. Willkommen!
Subscribers: more than 445 000 subscribers

Learn German with Jenny
About: Jenny produces fun and useful German lessons for the A1 - C2 levels. She teaches you how to communicate in German by showing you what you can say in different situations, like at the airport, in the office or when you are spending time with your family.
Subscribers: more than 480 000 subscribers

Learn German
About: Learn German from an experienced team of teachers for all levels: Beginners (Level A1 and Level A2), Intermediate (Level B1 and Level B2) and Advanced (Level C1 and Level C2). Our high quality German lessons provide you 24x7 German learning lessons free of cost! Choose your topic, level, category, time, place and pace to learn as per your needs. Learn not only words and grammar but also their usage in day to day life.
Subscribers: more than 275 000 subscribers

Get Germanized
About: Learn German, get to know Germany and German culture and have fun doing so! My videos are directed at English speakers that want to know about my country, its language and culture online for free and be entertained while doing so!
Subscribers: more than 360 000 subscribers

smarterGerman
About: Hi we are professional German tutors sharing our insights and experiences as well as samples of our German lessons for free on this channel.
Subscribers: more than 70 000 subscribers

MrWissen2go
About: History events explained in a simple way in German. Ideal for learners with B1 or higher levels
Subscribers: more than 275 000 subscribers

Gedankentanken
About: Knowledge-sharing and motivational talks in German. Similar to Ted-Talks.
Subscribers: more than 416 000

Quarks
About: Learn about science, mysteries of the universe, wildlife and nature in German
Subscribers: more than 244 000

ScienceSlam
About: Young and aspiring scientists or science enthusiasts share their knowledge and insights in a fun and concise manner in German
Subscribers: more than 35 000

taff
About: German lifestyle channel about all aspects of life, interesting news, celebrity coverage and more
Subscribers: more than 1.1 million

Slow German
About: Slow German is a podcast for German language learners – especially for those who’ve already mastered the basics. Annik, the journalist from Munich behind the podcast, covers interesting topics on culture, history, daily life, and so much more.

News on Deutsche Welle || Langsam gesprochene Nachrichten
About: Deutsche welle is a treasure chest for German learners and one of the amazing free resources they offer is slowly narrated international and local news they publish daily from Monday till Saturday. This section targets users from B1 upwards.

Top Thema on Deutsche Welle
About: Audio stories on important cultural, social, political, economic and other topics from all over the world. Great resource to expand your vocabulary

Sozusagen
About: This podcast about German language from Bayern 2 - a radio station based in Munich. In each episode, the moderators speak about the quirks, beauty and evolution of the German language.

Elementarfragen
About: The host Nicolas Semak interviews various exceptional personalities across Germany to learn more about what drives them and their life stories.

Gemischtes Hack (Spotify, Apple Podcasts, Google Podcast)
About: Comedy podcast is in the top 10 most popular German podcasts. Behind the show, are Felix Lobrecht and Tommi Schmitt, comedians and comedy script-writers.

Verbrechen
About: Sabine Rückert from die Zeit is an expert in crime and fight against crime. She has covered some pretty loud cases, including two scandalous cases when the verdicts were wrong. In this podcast, she investigates and shares various criminal cases and how they were cracked.

Herrengedeck
About: Another poupart German comedy podcast about daily life. The hostesses reject the mainstream ideas and have unique perspectives on everything from travel to household to career.

Was jetzt?
About: If you don’t like the slowly narrated news, then perhaps this podcast catches your fancy. Die Zeit editorial team’s coverage of the latest and most interesting news in German.

EULE/Jazzy Gudd
Jazzy Gudd is a German singer, TV actress and show hostess. She appeared in the 5th season of the program The Voice of Germany and made it to the knockouts.

Clueso
Thomas Hübner, better known by his stage name Clueso, is a German singer, songwriter, and producer. Born in Erfurt, he started performing at the age of 15.

Andreas Bourani
Bourani was born to Egyptian parents and adopted as an infant by a German family in Augsburg. In 2010, he received a recording contract with Universal Music. In April 2013, he was nominated for the German Grammy, GEMA, in the Best Pop Text category. Bourani's second studio album, Hey, was released in May 2014 and spawned the single "Auf uns" which topped the German and Austrian Singles Chart.

Lotte
Lotte is a young, but quite popular German singer and songwriter from Ravensburg. Her second album Glück will be released in autumn 2019

Wincent Weiss
Wincent Weiss is a German pop singer, songwriter and model. His first big public appearance was in Deutschland sucht den Superstar, a talent show, back in 2013.

Rock
Revolverhead
Revolverheld is a German rock band from Hamburg, Germany. Originally formed under the name Manga in 2002, the band renamed in 2004 to "Tsunamikiller" and later decided upon the current name after the 2004 Indian Ocean earthquake.

AnnenMayKantereit
AnnenMayKantereit is a German rock band from Cologne, which was founded in 2011. They sing in both German and English; a notable feature is the distinctive rough voice of the singer Henning May

Maxim
Maxim Richarz is a German singer and songwriter. He began performing in 2005 and released his most recent singles in 2014. Though called a Reggae artist he is hesitant to refer to himself as such and does more contemporary pop music in recent years. Maxim's music is frequently credited as having a strong emotional impact, with his lyrics often having darker emotional undertones. He is praised for his ability to both have this darker tone while keeping his music powerful and easy to listen to.

Rap/HipHop
Samy Deluxe
Samy Sorge, commonly known as Samy Deluxe, Wickeda MC or Sam Semillia is a German rapper, and hip hop artist from Hamburg. In 2001, Samy Deluxe released his self-titled debut album, which ranked #2 in the German Album Charts for the 19th calendar week of 2001. The first single from the album, "Hab' gehört...", ranked #26. The final single, "Weck mich auf", peaked at #4 in Germany, becoming a national hit and the album's most successful single. Following the success of his solo debut, Samy Deluxe became a highly acclaimed hip hop artist in German rap and internationally.

Kontra K
Kontra K is a street-smart, martial-arts obsessed German rapper based in Berlin. As a troubled adolescent, he found inspiration in American rap artists like Nas and Notorious B.I.G., and began writing his own lyrics after dropping out of high school at age 16.

K.I.Z.
K.I.Z is a German hip hop group from Berlin. The members are the three rappers Tarek, Nico and Maxim. Until 2018, DJ Craft was also part of the group. Their lyrics often contain a lot of black humor and irony as well as socio-critical content.

KRAFTKLUB
Kraftklub is a five-person band from Chemnitz, Germany. Their music is generally considered to be a mixture of rap and indie.

Namika
Namika (given name, Hanan Hamdi), also known by the stage name Hän Violett, is a German singer and rapper from a Berber Riffian Moroccan family. She is most famous for her song "Lieblingsmensch"

Seeed
Seeed is a German hip hop, reggae and dancehall band based in Berlin. Founded in 1998, they have become well known in Germany and its neighboring countries. Seeed consists of eleven band members, including three singers, a horn section and a DJ. Seeed is recognized for their catchy fusional mix of German hip hop, reggae and dancehall styles and their use of horns, which is unusual in contemporary popular music.

kwiko blog -  German learning strategies, tips and hacks.
About: Our blog is created by and for German language learners like you =). Here we share tips, best practices, strategies and resources to boost your German
Most popular posts:

Deutsch perfect
About: An amazing resource, especially for more advanced learners that offers an ideal combination of professional journalism and successful language training.

Freeletics blog - Health and Fitness
About: Freeletics is a fitness app for functional training, running and bodybuilding. They have a great blog with tips on healthy nutrition, fitness, and health. If you are interested in sports, their posts are both insightful and useful for your German

Black Dots White Spots - Travel Blog
About: If you like travelling, then this blog might catch your fancy. Colorful, exciting posts full of images about Susi’s travel adventures across the world. Susi’s blog often makes into the top German blogs in the travel category

Meerblog - Travel
About: Another travel blog with a twist - it’s about travel by see and locations with direct access to seas and oceans.

Gourmet Blog - Travel and Food
About: Who doesn’t like delicious food? This blog is full of stories about the most delicious foods from all over the world

30Tausend.de - Business and Career
About: Arthur and Michael share their experience and advice (since 2008!) on the topics of entrepreneurship, business, career, self-development. One of the top 10 blogs in the self-development and career category in Germany

Lebeblog.de - Lifestyle and Self-development
About: The purpose of the blog is to help its readers with self-realization through increased self-awareness, mindfulness, and self-development

Leben ohne Limit - Psychology and Self-development
About: Similar to lebeblog above, this blog helps you better learn yourself, improve your understanding of psychology and embrace a positive outlook on life

Goethe online tests for all levels
Goethe Institut is one of the premium German-learning schools and offers a German test online for all levels from A1 to C2. It is quite comprehensive, so make sure to block at least 45 minutes of time.

I update this list regularly to keep it fresh and keep adding more interesting and useful resources for German learners. If you have a suggestion, please send me an email at hello@kwiko.app or via our contact form.